A Moment of Transformation 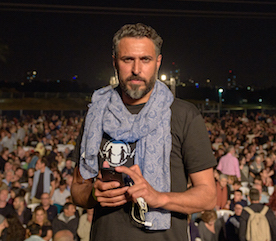 The Joint Memorial Ceremony is our largest event of the year. Nearly 300,000 people attended in 2021, making this the largest Israeli-Palestinian joint peace event in history. The Ceremony takes place each year on Yom Hazikaron, the Israeli National Memorial Day. Together, we challenge the mainstream narrative, declaring that war is not an act of fate, but rather a human choice. Together we can make another choice.

My name is Adam Rabee, I am 43 and from Ramallah. This is the fourth year I will be watching the ceremony, and the second year that I am also involved in producing it. Today it is clear to me why I participate in this Ceremony, but the journey here was not easy.

When I first heard about the Joint Memorial, I was curious. I wanted to be there and to understand what the event was about, so I signed up to be one of the guests. Memorial Day is usually an Israeli-only occasion, and at first I felt very out of place. As I sat there I felt the old warrior in me was resisting and anxious, and raising questions: how can I be here while the occupation is still going on? Like in a film, the pictures went through my head: home demolitions, administrative imprisonment, settler violence, herdsmen and shepherds’ broken voices separated from their land, cries of mothers fearing the fate of their children. But the more I listened, the more I realized how this ceremony is a place where something extraordinary was happening….

I remember being surprised to see Israelis who wanted peace and who acknowledged the pain of the Palesinian community. I did not know, throughout my years in the resistance, that there was pain on the other side. I could not imagine that a soldier had a mother who would cry if he was killed, just as my mother would cry if I was killed.

At the ceremony, I saw tears in people’s eyes, and I couldn’t identify if they were Israeli or Palestinian. I saw people who believed in each other. I saw emotions, thoughtfulness, compassion.  I saw that there is a place where I could share my pain and also feel the pain of the “other.”

I remember the moment when they announced the arrival of the Palestinian guests, and the whole crowd – thousands of people – applauded for long minutes. It was so exciting … I felt like I was in the right place. This is the world I want. I want the respect and compassion that I experienced here to grow and expand to the whole country.