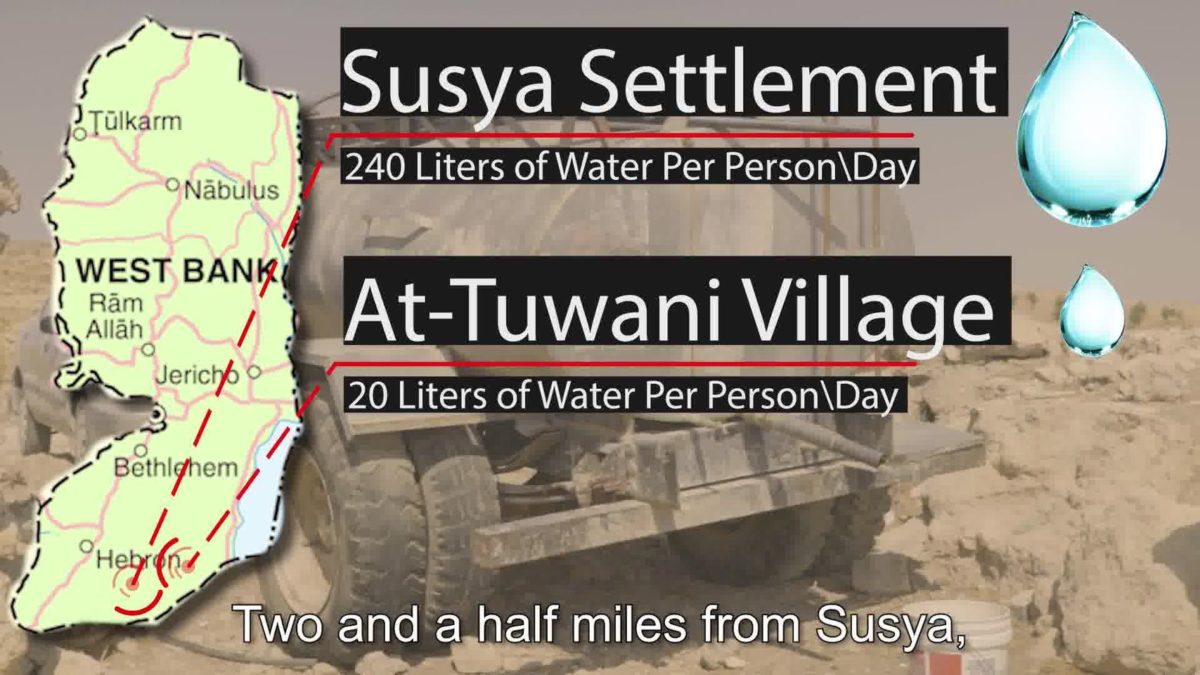 Israel has controlled all the natural resources in the West Bank since 1967. It uses these resources to exert control over the Palestinian people, and to promote Jewish settlement at the expense of the local Palestinian population. Water is the most important resource; the right of access to water and sanitation is a fundamental right enshrined in the international conventions to which Israel is a signatory. Nonetheless, the state of Israel is violating these international agreements, and denying basic human rights to the local indigenous community.

The situation is most dire in the of dozens of localities in the south Hebron Hills and the Jordan Valley.  Israel does not allow these villages to be connected to running water, nor are they permitted to collect rainwater (which is “legally” owned by the State), therefore they are forced to buy water year-round from Israel in the form of expensive water tanks. Delivery costs to these localities are particularly high due to poor access. Israel does not permit the dirt roads leading to the villages to be paved. The escalating cost of water under these conditions is up to 5 times the cost of water in Israel and in many cases this water is unsafe to drink due to the poor sanitation conditions in the tankers.

According to a survey conducted by the United Nations Office for the Coordination of Humanitarian Affairs in 2013, approximately 30,000 people live in this area. In addition to imposing severe restrictions on the development of water infrastructure in these localities, Israeli authorities and settlers have taken control of the natural water sources that the local communities relied on for years.  Cisterns and wells have been destroyed by both military and settlers, and the access to them has been blocked.

This situation underscores that Israel views water – like other West Bank resources – as its exclusive property. Water has a double standard: on the one hand, the state supplies abundant water to Jewish settlements, including outposts that are illegal even by its own laws and definition. On the other hand, it denies Palestinians’ access to water as a deliberate attempt to push them out of their homes and villages. A constant shortage of water prevents many communities, especially in the southern Hebron Hills and the Jordan Valley, from developing economic resilience, thus intensifying poverty and despair.

The dispossession of a local population by denying access to water under various pretexts is unethical and constitutes a form of ‘ethnic cleansing’. This policy is in violation of international law and undermines any attempt to reach a political compromise in the area. Combatants for Peace is committed to putting an end to this criminal policy.