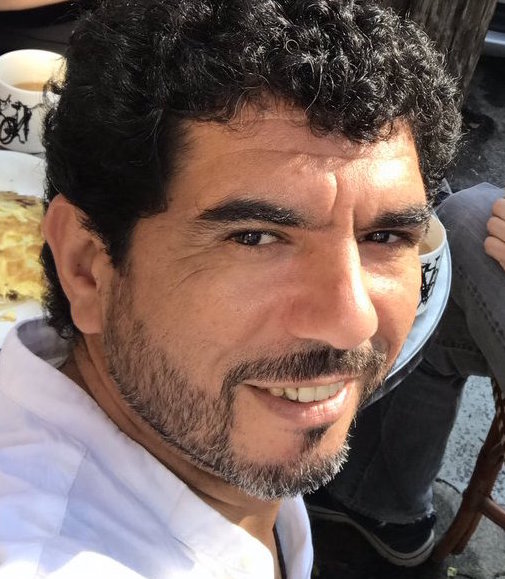 I grew up in a village called Hizma, in northeast Jerusalem. I came from an indigenous community that is deeply rooted and connected to the land. I used to walk with our sheep after school, taking my flute and spending long hours in the mountains. When I was small, I used to travel to my family’s land with my grandfather, riding a donkey, in order to harvest the figs, grapes and olives in our orchards and farms. Our family had lived on this land for generations, our family is proud that we were even registered in the Ottoman Archive, as far back as the fifteenth century.  The local folklore, traditions, dress and songs were passed down to me from my ancestors and treated with deep reverence.

When I got a bit older, around thirteen years old, I became more interested in Palestine, I started to secretly listen to revolutionary music, and hide revolutionary magazines under my bed.  In my school discussing politics was barred. The Palestinian flag was illegal, and even saying the word “Palestine” could get us thrown in jail. I started to connect to Palestinian prisoners and activists, and it opened my eyes about our situation under occupation, and I became involved in the struggle for a free Palestine.

In 1986, when I was fourteen years old, I informally joined the Fatah Youth Movement. I threw stones at soldiers, wrote graffiti on public buildings, hung Palestinian flags and prepared Molotov Cocktails. Soon, I felt stones were no longer enough; I wanted to find a way to get a weapon. I decided to try to steal the guns from an Israeli soldier. I went with a friend who’s home had been demolished. We stabbed two Israelis, who were slightly wounded in the attack and we ran.

Three days later we were arrested. I was fourteen and a half years old when I was jailed. When I turned fifteen, I received my sentence: fifteen years in jail. The Israeli army also invaded my mother’s home and barricaded off my room with concrete. During my time in jail, two of my brothers were also arrested and imprisoned; my mother’s heart broke.

During the first two and a half years of my imprisonment, I was placed in the juvenile section in the Hebron jail. The management and staff were extremely cruel. The use of torture was routine: beating prisoners, spraying tear gas into prison cells, and violently stripping prisoners were regular occurrences – and this was a jail for children.

There were many additional problems as well, for example, there was rarely enough drinking water and there was never enough water for showers. To improve the daily conditions in prison, I joined hunger strikes, eating nothing and drinking only salt and water for 10 days at a time, sometimes as long as 17 days. It was through these hunger strikes that I first learned about nonviolent struggles and the virtue of patience.

As I continued with my sentence, I was transferred to the Janad jail, next to Nablus. There, I worked in the library and had the opportunity to read a lot. I never had a chance to get a formal education, but I educated myself in jail. We used to call prison, “The Revolutionary University.”

In addition to reading and watching documentary films, every day I participated in learning groups; I began to have new thoughts about the conflict and the means for resolving it. In an attempt to learn about the “enemy,” I studied the history of the Jewish people and taught myself both Hebrew and English. It was then that I realized there are multiple narratives to the conflict – for both our peoples. One day I had the opportunity to watch Schindler’s List. I was deeply moved, and it changed my life forever. I realized that these “enemies” were actually human beings who were also suffering.  The journey of  my transformation was painful, but it was also deeply spiritual. Slowly, I reconstructed my worldview.

I realized I had mistaken the enemy. I had thought it was the Jewish people, but I was wrong. Instead, we have common enemies: hatred, fear and collective trauma. I knew that if we could somehow unite against these common foes, then together we could end this conflict. Our land does not belong to the Jews or the Palestinians only. We both belong to the land. I read writings from Mahatma Gandhi, Nelson Mandela and Dr. Martin Luther King Jr. I realized that there is no military solution to our conflict. The only possible solution is a joint, nonviolent struggle for peace, freedom, security, and human rights for all.

In 1997, after 10 years and 5 months in jail, I was freed. I joined with some friends, and we established the Abu Sukar Centre for Peace (later Alquds Association for Democracy and Dialogue). We hosted Palestinian-Israeli youth programs, where we would use soccer to bring children together. In January 2004, I joined the first Palestinian-Israeli mission to Antarctica. In 2005, a few friends and I started engaging in secret meetings with former Israeli soldiers. These meetings eventually led to the establishment of Combatants for Peace in 2006. It has not been easy: we still face checkpoints, ever expanding settlements and the separation wall keeping our two sides apart. But together we hold firm to our resolutions of community building and nonviolent struggle.

It is the combatants who fought in this war who must take responsibility for our part in perpetuating the violence. We are the ones with the power to end it. Today, I stand with my brothers and sisters, both Palestinian and Israeli. I know there is a way forward to freedom and life for everyone in our beloved homeland; it takes only a little bit of forgiveness and a small amount of love. Together, we can bring peace, freedom and secure human rights for all.