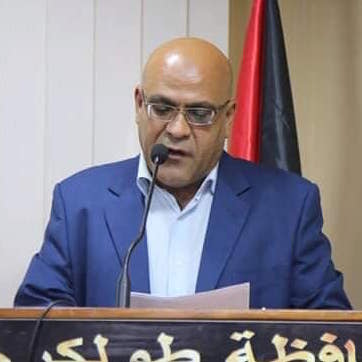 I was born and raised in the Palestinian refugee camp, Tulkarem. We lived in very difficult circumstances, and were not treated like human beings at all. All around me there was violence, killings and arrests.

In 1972 the Israeli Defence Force (IDF) arrested my father for possession of weapons, and put him in jail. When I was 15, two young men were killed inside the camp. After that I decided that I wanted to take part in the resistance. At the same time it was discovered that the Israeli military had poisoned a girls school and pupils had become very sick. The people of Tulkarem were outraged and many started to demonstrate. I took part in the demonstrations and was arrested for the first time.

In 1987, during the First Intifada, I finished high school and became a student at Birzeit University. A year later they closed the university and I was arrested again. This time I was beaten for my resistance activities. The intimidation was relentless. In the end, after yet another arrest, I ran and kept on running. Soon I became a wanted man.

While on the run I became responsible for the political and military wing of the local Fatah party. We fought the Occupation relentlessly, trying to secure freedom for the Palestinian people.

At this time I decided that I wanted to get married, but it was difficult for a wanted man to find a wife. In the end I met my future wife, Amal, at a demonstration. She was throwing rocks at soldiers; I immediately knew that this was the woman for me.

On the day of the wedding, in 1989, the military disguised themselves as women and came to arrest me. Luckily they were spotted as uninvited guests. Shots were fired. I escaped with my bride to a mountainous area where we had a secret wedding. For the following six years I never once slept in my own bed: I was in hiding for one year, after which I was caught and spent the next five years in prison.

In prison I was interrogated for 86 days. This was an extremely difficult time, with beatings, intimidation and mind games. The mental torture was worse than the physical violence. For ten days I was locked in a tiny, dimly-lit room with nine other people, all of us sitting with our hands and feet tightly bound. If we needed to go to the bathroom we had to do it on ourselves.

During my time in prison I became a representative for Palestinian prisoners, and through liaising with Israeli guards I learned how to use dialogue to satisfy our needs. On the day I left prison, the warden encouraged me to get involved in the peace process but I told him, “I’m a free man now and I can do what I want. Peace hasn’t achieved anything.” I thought to myself, first Israelis arrest me and then they ask me to make peace!

After my release I worked to help the Palestinian Authority take control away from Hamas. In 2000, when the Second Intifada broke out, I went to the District Commander’s office and threw rocks at the Israeli army. The violence escalated when Dr. Thabet Thabet, a senior member of Yasser Arafat’s movement and a man who believed passionately in the peace process, was shot dead in his driveway. By killing this man the Israelis killed any hope for peace. It simply fueled antagonism. From then on we saw airships, tanks and daily incursions. I lost four of my best friends. It was around this time that I began to ask myself, ‘Where is all this violence getting us?’

A woman who used to teach me at the university, asked me to head up a non-violent movement. Nothing else was working, so I thought I would give it a try. I gathered 20 people for a workshop and training. It wasn’t easy convincing people to get involved, but the more I studied the writings of Gandhi, Martin Luther King and Nelson Mandela, the more certain I became that this was the only way to achieve our aims. I knew that non-violence would work better than violence. A lot of people in Tulkarem disagreed with me and called me a traitor, but I refused to listen.

The same day that I opened an office for peace, I was arrested by the military again, just as I was leaving to go on an outing with my wife and children. They tied me up, blindfolded me and interrogated me. I knew this was because non-violence threatened the army just as much as violence.

I’ve been involved in the nonviolent resistance movement from that day onwards. Through the years I’ve brought many friends around to my way of thinking. I truly believe that nonviolence is the only way.