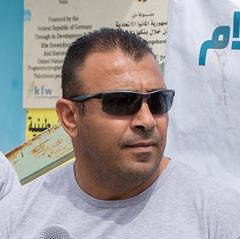 My family is originally from the village of Al-Qubeiba, which was forcibly evicted in 1948. My story and the suffering of my family starts from that year. My family used to live in one of the most beautiful Palestinian villages, but as a consequence of the war, all of the inhabitants of the village ran away except for my grandfather. He refused to run. As a result, he was killed in his own home.

After that, my family moved to the Palestinian City of Hebron because it was the closest city to Al Qubeibah, all the time hoping that one day they would return to their village. But it did not happen, over the following years our suffering only worsened.

In 1967 my family was evicted for the second time. This time they ran to Jordan and tried to establish a new life there. In 1971, I was born and opened my eyes for the first time in a country that was not my own. Soon after, two of my uncles joined the Palestinian Liberation Forces (PLO) in Lebanon and my mother decided to go back to Palestine. We moved to a refugee camp near Bethlehem.

In 1982 the Israeli Army invaded Lebanon and one of my uncle’s was killed. My other uncle watched him die and was forever traumatized. We were in mourning for three days when we heard about the massacre of Shabra and Shatila, which are two Palestinian refugee camps in Lebanon. 3000 Palestinians were killed in 24 hours. Demonstrations and stone throwing against the Israeli soldiers and settlers escalated in our camp. Growing up, there were more than 10 violent demonstrations daily in front of our house.

Every time when stones were thrown at the soldiers, the soldiers entered our house and checked everything, including us: my mother, my siblings and me. They beat us on an almost daily basis and terrified us. They would call my mother all sorts of terrible names. I asked her: “Why are these soldiers here? Why do we not have an army to protect us? Why we cannot go back to our home village?” I used to have many questions, but my mother gave me only one answer: “The Israeli army is occupying and controlling the Palestinian people.”

The years passed, and in 1987 the first intifada started. I participated in the intifada by throwing stones and helping with street blockades. I wanted to take revenge on those soldiers who humiliated my mother and me. This was my way of expressing my anger. I become one of the most active protestors in the refugee camp and soon became a leader in the demonstrations.

More then once as a young teen I was shot by live bullets. Eventually I was caught by the army and put into administrative detention for six months. After my release, I was surprised to find that the refugee camp had changed. The army built a fence nine meters high around the street and ordered a curfew from 5pm until 5am.

Shortly after my release, my brother, who was 14 years old, just 2 years younger then me, went out of our house to visit our uncle. He lived barely 50 meters from our home, but it was evening, after curfew. On the way, several soldiers who were stationed in the alleyway surprised my brother. He became very afraid and ran. The soldiers ran after him and shot him. It was a “Dumdum” bullet, which explodes inside the body into small parts, destroying the body from within.

My brother was transferred to a hospital in Jerusalem. I entered the emergency room to see my younger brother lying in a pool of his own blood. He was dead. I didn’t know what to do. I felt that the sky was falling on my head. How could I tell my mother?

I brought my brother’s body from the hospital back to our camp in Bethlehem. On that day, I lost not only my brother, but I also forever lost my mother’s smile.

The years passed and the second Intifada started with the bombings in Israel. One day I came home to see my mother and brothers crowded around the television. There had been a bombing attack on a bus and many people died. Even children were killed. My mother was crying. I asked her: “Why are you crying, Mama? Those are Israelis who were killed, not us.” She looked at me and said, “Those kids who were killed have mothers. And those mothers will have the same feelings and the same pain that we went through. The tears of a Palestinian mother are not different from the tears of an Israeli mother. Blood has only one color. There is no red blood and black blood.”

When I heard her reaction I realized that my suffering is only a drop in the sea compared to her suffering.

I first met Combatants for Peace during the Israeli-Palestinian joint Memorial Ceremony. I was amazed to see and hear what they were doing. I soon joined the movement and became an activist. Today I continue to fight for the freedom of my people, but I do so peacefully. In Combatants for Peace we work together, Palestinians and Israelis, for justice, peace and equality.