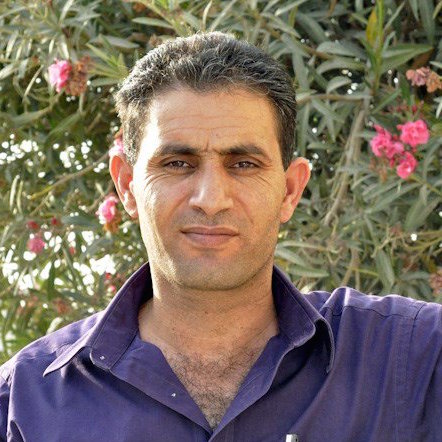 As a child I fought the occupation by raising the Palestinian flag in our playground. We never felt safe. We were always running from jeeps to avoid the soldiers beating us. Our homes were invaded and children were killed. At the age of 12 I joined a demonstration where a boy was shot by a soldier. I watched him die in front of me.

From that moment I developed a deep need for revenge. I became part of a group whose mission was to get rid of the catastrophe that had come to our town. We called ourselves freedom fighters, but the outside world called us terrorists. At first we just threw stones and empty bottles, but when we came across some discarded hand-grenades in a cave, we decided to hurl them at the Israeli jeeps. Two of them exploded. No one was injured but we were caught and in 1985, at the age of 17, I received a seven- year prison sentence.

In prison we were treated like heroes by the other prisoners, but our jailers taught us how to continue hating and resisting. On 1 October 1987, 120 of us – all teenage boys – were waiting to go into the dining room when the alarms suddenly went off. Over a hundred armed soldiers then suddenly appeared and ordered us to strip naked. They beat us until we could hardly stand. I was held the longest and beaten the hardest. What struck me was that all the soldiers wore smiles on their faces. They were beating us without hatred, because for them this was just a training exercise and they saw us as objects.

As I was being beaten, I remembered a movie I’d seen the year before about the Holocaust. At the time I’d been happy that Hitler had killed six million Jews. I remember wishing that he’d killed them all, because then I would never have been sent to prison. But some minutes into the movie, I found myself crying and feeling angry that the Jews were being herded into gas chambers without fighting back. If they knew they were going to die, why didn’t they scream out? I tried to hide my tears from the other prisoners who wouldn’t have understood why I was crying about the pain of my oppressors. It was the first time I felt empathy. So now, walking between the soldiers who were beating me, I remembered the movie and I started screaming out at them: ‘Murderers! Nazis! Oppressors!’ And as a consequence, I felt no pain.

The incident with the soldiers made me realize that we had to preserve our humanity – our right to laugh and our right to cry – in order to save ourselves. I also slowly realized that the Israeli oppression was because of the Holocaust, and I decided to try to understand who the Jews were. This led to a conversation with a prison guard. The guards all thought of us as terrorists and we hated them, but this guard asked me, ‘How can someone quiet like you become a terrorist?’ I replied, ‘No, you’re the terrorist. I’m a freedom fighter.’ He really believed that we, the Palestinians, were the settlers, not the Israelis. I said, ‘If you can convince me that we are the settlers, then I’ll declare this in front of all the prisoners.’

It was the start of a dialogue and a friendship. We discovered many similarities and some months later the guard said he understood now that we were not the settlers. He even became a supporter of the Palestinian struggle. From then on he always treated us with respect, and once even smuggled in two big bottles of Coca Cola, which I shared with all the other prisoners. Seeing how this transformation happened through dialogue and without force made me realize that the only way to peace was through non- violence. Our dialogue enabled us both to see each other’s purity of heart and good intent.

When I was released, it was the time of the Oslo Accords, and there was a great feeling of hope for a two-state solution. But it never happened because the politicians said we weren’t ready for it. I think if I hadn’t had such strong beliefs and principles, anger would have taken over. It wasn’t until 2005 that some of us who believed in non-violence started meeting in secret with former Israeli soldiers. We were meeting as true enemies who wanted to speak. The Israelis were refusing to fight, not for the sake of the Palestinian people, but for the sake of the morals of their society. We too were not acting to save Israeli lives, but to prevent our society from suffering more. It was only later that we both came to feel a responsibility for each other’s people.

There is a much darker side to my story. on 16 January 2007, my ten-year-old daughter, Abir, was shot and killed in cold blood by a member of the Israeli border police while standing outside her school with some classmates. There were no demonstrations or violence or intifada. I have been appalled by the details of what happened, not least that she had just bought a candy at the store and hadn’t had time to eat it.

It took me four and a half years to prove in the civil court that my daughter had been killed with a rubber bullet. My goal has been to bring the soldier responsible to trial, but the Supreme Court decided after four and a half years there is no evidence, so they closed the file for the fourth time. I believe in justice and many hundreds of my Israeli brothers and Jewish brothers around the world support me. I want to bring this man to justice because he killed my ten-year-old daughter; not because he’s an Israeli and I’m a Palestinian but because my child was not a fighter, nor was she a Fatah or Hamas member. For there to be reconciliation, and for me to consider forgiveness, Israel has to recognize such crimes.

Abir’s murder could have led me down the easy path of hatred and vengeance, but for me there was no return from dialogue and non-violence. After all, it was one Israeli soldier who shot my daughter, but one hundred former Israeli soldiers who built a garden in her name at the school where she was murdered.