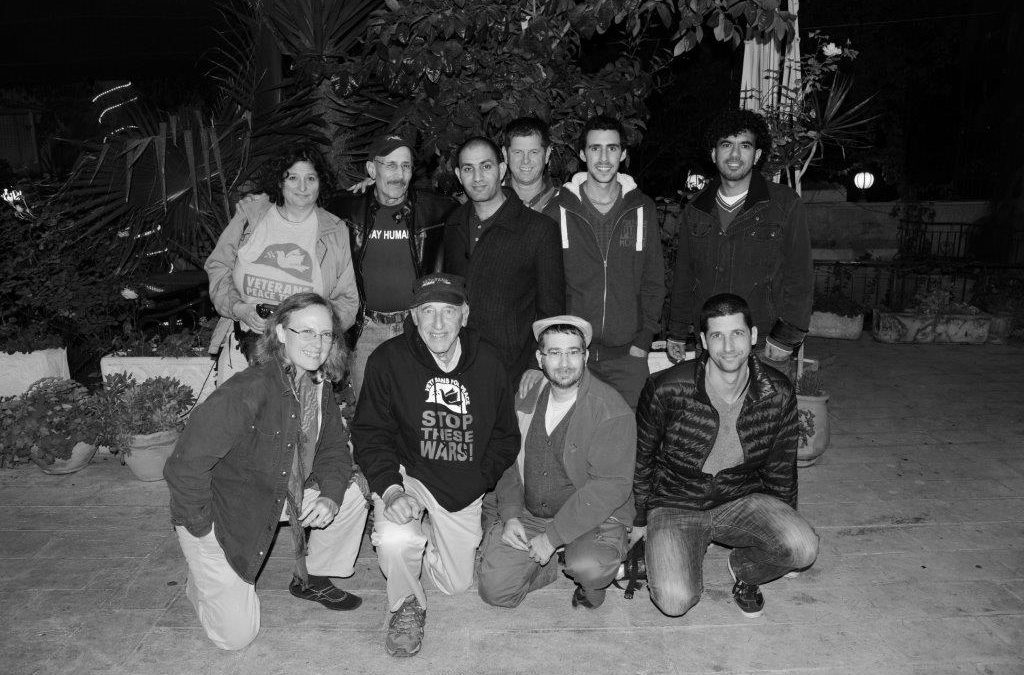 It was November 2013, in a quiet restaurant in East Jerusalem, when a small delegation of Veterans For Peace (VFP) met with some  remarkable Israeli and Palestinian activists from Combatants for Peace. We sat at a big table across from each other, four U.S. military veterans and six Israeli and Palestinian former combatants, all who had renounced violence to work together for peace. We heard heart-wrenching stories on both sides of loss, forgiveness and a commitment away from violence. We shared a common goal of working nonviolently for peace and social justice regardless of what hostilities our governments promoted. We witnessed solidarity and brotherly love between these former adversaries that in itself set a vivid example of what we all hoped to see one day.

Combatants for Peace was founded In 2006 when Israeli and Palestinian former combatants, people who had taken an active role in the conflict, laid down their weapons and joined forces to break the cycle of violence. The organization works to both transform and resolve the conflict by ending the occupation, resisting all forms of violence between the two sides, and building a peaceful future for both peoples.

One of the founding Palestinian members of Combatants for Peace, Bassam Aramin, was at the dinner.  In 2007, a year after Combatants for Peace was formed, he lost his 10-year old daughter, Abir to a rubber bullet fired by an Israeli border policeman as she was carrying her books home from school. She was known as a model student. Bassam was devastated but renounced the desire for revenge to seek a nonviolent justice.

Three years later he, his grief stricken wife and Abir’s memory were justified when an Israeli judge, after the initial denial by the Israeli Police, declared, “Abir and her friends were walking down a street where there were no rock-throwers, therefore there was no reason to shoot in their direction. It is clear that Abir’s death, caused by a rubber bullet shot by border guards, was due to negligence…”

On Friday, March 8th at the Woodstock Community Center from 7 to 9:00 pm, and also on Saturday, March 9th, 7 to 9:00 pm at the Episcopal Church of Messiah, 6436 Montgomery St, Rhinebeck, two former combatants, one Israeli and one Palestinian, will share their personal stories of transformation from violence to nonviolence. The program will include a short clip of the award-winning documentary: Disturbing the Peace.

Palestinian Osama Elewat, one of the speakers says, “I know that we can only heal this situation if we work together. We can only end this conflict, and heal the sorrow and pain of both our nations, if we work together cooperatively and peacefully. Peace cannot come through war. Freedom will only come when we break out of the chains that bind us: the chains of hatred, of violence and of revenge. Love truly is the strongest force on this earth. A revolution of love is the only thing that can save us.”

Michal Hochberg, the other speaker, says after she met Palestinians and heard “their stories and the daily suffering they were experiencing, I could no longer keep my eyes closed.”

**Update: A few days ago the Palestinian speaker, Osama Elewat, was turned back at JFK airport, after being interrogated for 13 hours. No reason was given for this action by the immigration authorities.

Organizers are hoping to arrange an audio-visual link to enable Elewat to participate in the panel remotely from the West Bank – but questions are being raised as to why a visitor here to tour the country with a message of peace was turned away. In Woodstock and Rhinebeck, Elik Elhanan, one of the original founders of Combatant for Peace, now a professor at City College will also speak.

Organizers have decided to continue with the speaking tour.

Tarak Kauff is a paratrooper veteran of the U.S. Army. He served on the Veterans For Peace (VFP) board of directors for six years and is now the managing editor of VFP’s 24-page quarterly newspaper, Peace in Our Times.