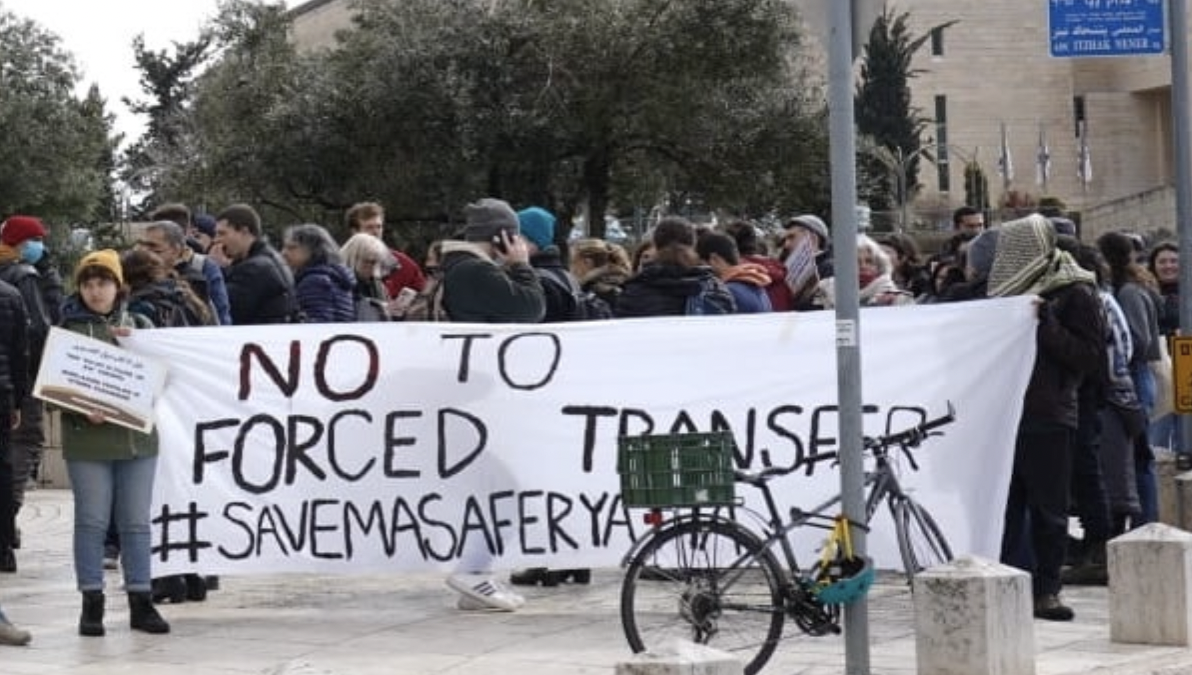 Combatants for Peace is dedicated to protecting communities from demolition, expulsion and ethnic cleansing. Here is a sample of the recent work in communities across the land:

A field tour hosted by Combatants for Peace took a group of activists to al-Walaja, a community in Jerusalem threatened with demolition. Given their prized location adjacent to Jerusalem, the Palestinian community in al-Walaja has faced the threat of expulsion for decades. CfP cofounder Souli Khatib met with the group, shared his personal story, and Combatants for Peace’s non-violent resistance. Personal stories like Souli’s are vital to connect real people to the struggle against the occupation and its overwhelming violence. Opening people’s eyes to the reality of occupation and oppression is fundamental to building an equitable future.

This past month, settlers attacked Palestinian elder Muhammad al-Shalaldeh while he was working on his farm. Combatants for Peace activists brought a team from the World Council of Churches’ Ecumenical Accompaniment Programme in Palestine and Israel (EAPPI) to visit al-Shalaldeh . He spoke to us about the violence of settlers and the occupation, making his point by gesturing with his hand, still in a cast.

Settler violence against Palestinians is a common reality. In February alone, settlers attacked and wounded at least 8 Palestinians in the West Bank, and in numerous other attacks punctured tires, destroyed many recently planted olive trees, and even assaulted a group of herders and their cows. We at Combatants for Peace work every day to protect people from the violence of the occupation, but we know that the only permanent solution is to end the occupation.

The Israeli High Court of Justice held a hearing on the intention to declare the Masafer Yatta area in the South Hebron Hills a military training area, forcefully displacing hundreds of Palestinian families from their homes and land as a result. The 1,300 Palestinian residents of Masafer Yatta in the South Hebron Hills regularly bear the brunt of Israeli occupation and apartheid.

For years, the Israeli government has tried to declare most of the land a ‘firing zone’ — which could effectively expel 12 villages in their entirety and leaving the residents homeless. On the day of the hearing, hundreds came out to protest in front of the court. Eventually, the hearing was adjourned, with another court date scheduled in lieu of any decision. We refuse to be passive bystanders to such a crime or to wring our hands after the fact. We stand in solidarity with the brave resistance taking place in Masafer Yatta.

Combatants for Peace activists continue to join in weekly protests in Sheikh Jarrah, in an effort to halt the ongoing expulsion of Palestinian families from the neighborhood. Weekly demonstrations have taken on a quieter tone lately, following the Israeli Supreme Court’s decision to stay the forced displacement while the state carries out a ‘land arrangement’. This new plan calls for a review of ownership rights across the neighborhood, resulting in an indefinite stay upon the pending evictions. It’s unclear how long this process will take, meaning that Palestinian residents of Sheikh Jarrah may enjoy relief from the lingering threat of displacement for weeks, months, or even years. This ruling is a temporary victory, and we remain vigilant in the face of the occupation.