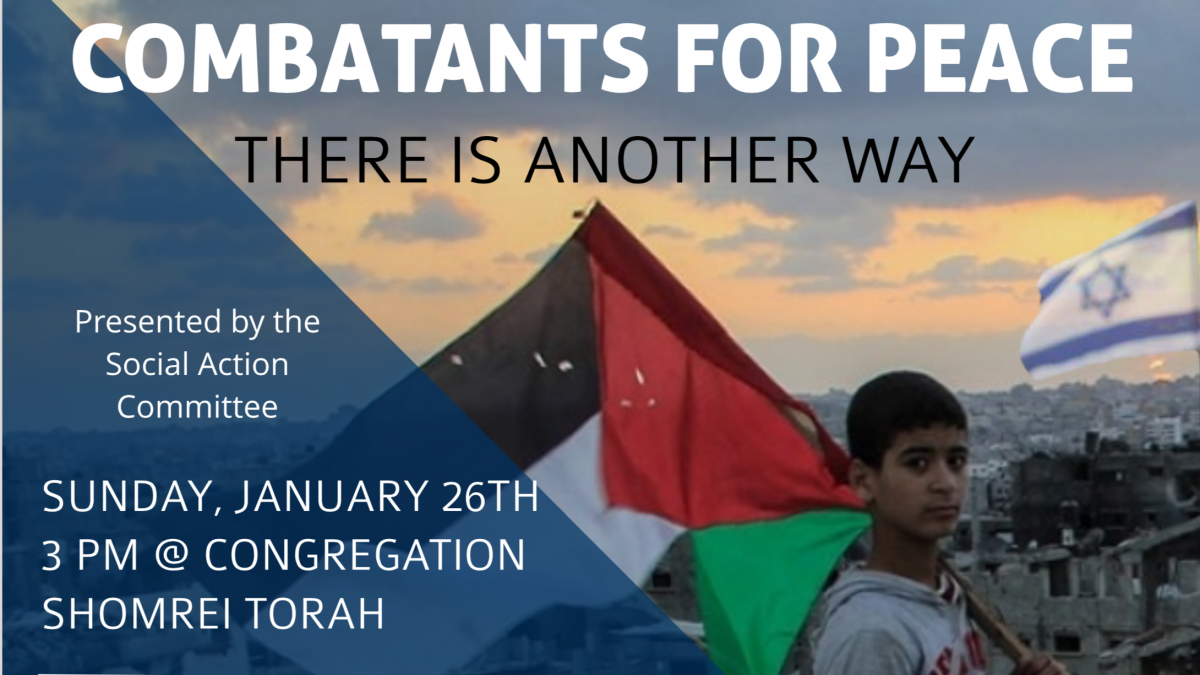 Combatants for Peace – There Is A Better Way

On Sunday January 26 at 3pm please join us for a presentation by Yoni Kallai and Ismail Assad, members of Combatants for Peace at Congregation Shomrei Torah 2600 Bennett Valley Road in Santa Rosa.

In 2006, Israeli and Palestinian former combatants, people who had taken an active role in the conflict, laid down their weapons and established Combatants for Peace. The egalitarian, bi-national, grassroots organization was founded on the belief that the cycle of violence can only be broken when Israelis and Palestinians join forces. Committed to joint nonviolence since its foundation, CFP works to both transform and resolve the conflict by ending Israeli occupation and all forms of violence between the two sides and building a peaceful future for both peoples.

Yoni Kallai is a former Israeli Military combat officer who served in the army for five years, and later as an officer in the reserves. His unit was active in all fronts between the northern borders, Gaza and the West Bank. Growing up in Jerusalem during the mid 90’s, he suffered directly from terror attacks, including the loss of two schoolmates when he was 15 years old. He grew up believing that the military was the only way to protect his society, but after serving in the army came to realize that never-ending militarization and war was only hurting both peoples.

Ever since Ismail  Assad was young, he was determined to work for freedom and equality for his people. During the first Intifada he was shot by an Israeli bullet in the face and lost his eyesight for three months as a result. In response, he joined the resistance and  was arrested nearly ten times and imprisoned on and off for seven years. In jail he had the opportunity to read and educate himself about the conflict, the occupation and the resistance. He realized that his activity was only bringing more loss and pain into his life, and not bringing his people any closer to freedom. He has since become a nonviolence activist, working together with Israeli partners to bring peace and reconciliation between Palestinians and Israelis.

This very special event is sponsored by the Social Action Committee of Congregation Shomrei Torah and is Free and open to the public. Carpooling is encouraged. For more information call 707-578-5519 or go to www.cstsr.org