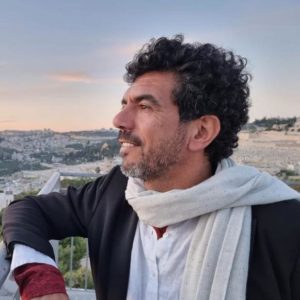 Sulaiman Khatib was born in Hizmeh, a town just outside Jerusalem, and currently  lives in Ramallah. He is a Board Member of the Middle East Initiatives and is a Co-Founder and former Co-Director of Combatants for Peace (CfP). CfP is a non-profit Israeli and Palestinian peace building organization with headquarters in Bethlehem and Tel Aviv. Its founders are ex-Israeli solders and ex-Palestinian prisoners who decided to join hands in joint non-violent resistance as a means to end the occupation and bring equality, freedom, and peace to both peoples. Currently, he serves as the Director of International Relations for Combatants for Peace.

Sulaiman was the Founder and General Director of Al-Qud’s Association for Democracy and Dialogue, which he founded with fellow Palestinian peace activists in 2005. Al-Qud’s worked with youth in order to be able to create effective and sustainable programming focused on the promotion of peace, democracy, dialogue, and civic participation in the Palestinian Territories.

At the age of 14, Sulaiman was sentenced to 15 years in prison and served a term of 10.5 years. He spent his time in jail learning about history, Hebrew, English, and about other world conflicts and peace activists, such as Ghandi and Mandela. He acquired the entirety of his education and worldview in jail. This is when he began to have new thoughts about the conflict and the means for resolving it. As a result, he is a committed advocate for peace in the Middle East and an active member of various programs aiming to promote a peaceful solution to the Palestinian-Israeli conflict, both within local communities and on regional and international levels.

Sulaiman and Chen Alon, another co-founder of Combatants for Peace, were nominated twice for the Nobel peace prize 2017 &amp; 2018. Both times the nomination was on behalf of CfP. Sulaiman starred alongside fellow CfP activists in ‘Disturbing the Peace‘, an award winning film detailing the origins of the Combatants for Peace movement, which was released in 2016.

Sulaiman is the author of In This Place Together: A Palestinian’s Journey to Collective Liberation, alongside co-author Penina Eilberg-Schwartz. The work chronicles the powerful experiences that led him to dedicate his life to joint nonviolence, through encountering the deep injustice of torture, witnessing the power of hunger strikes, and studying Jewish history.