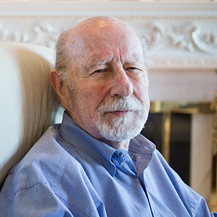 President of The Topol Group LLC and The Topol Family Fund.

Sidney Topol was born in 1924 in Dorchester, Massachusetts. His parents were Yiddish speaking immigrants from Poland. Topol enlisted in the Army Air Corp during WWII, where he was trained as a radar officer. In the Boston area, Topol has served on the board of the American Jewish Committee, the Jewish Community Relations Council of Greater Boston, and Combined Jewish Philanthropies of Greater Boston.

Topol hold a B.S. in physics and an honorary Doctor of Science Degree from the University of Massachusetts. He graduated from Harvard-MIT Radar School and has been awarded the MIT Corporate Leadership Award. Mr. Topol has been inducted into the Satellite Hall of Fame, the Cable Television Hall of Fame, the MTC Hall of Fame and the Georgia Technology Hall of Fame.

Topol was general manager of Selenia Telecommunications, a Raytheon joint venture in Rome, Italy from 1960 until 1965, when he became head of Raytheon’s communications division. From there he went to Scientific-Altanta, retiring as Chair and CEO in 1990.

Topol has served on the board of Americans for Peace Now since 2000 and the J Street PAC since 2008. He served on the board of Brit Tzedek v’Shalom from 2004-2009. In 2003, he went to Geneva, Switzerland to witness the signing of the Geneva Accord, a draft agreement to end the Israeli–Palestinian conflict. During that time, Topol was also an active member of American Diaspora Alliance for Israeli-Palestinian Peace, a Boston area dialogue group.

Topol’s newest peace-related venture is funding programs to create leaders of non-violence at ten universities in the U.S. and Israel.

Topol is President of The Topol Group LLC and The Topol Family Fund.