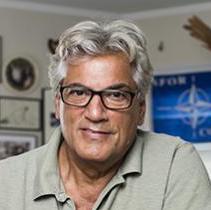 At Tufts, I was initially a lecturer in the Department of Political Science, first in 1978, and then returned to the Department for a year in 1984. In 1985-86, I created the Experimental College’s Symposia Project (SP), and was named Special Advisor for University Intellectual Life.

The SP soon evolved into what became the core program of the Institute (1985 -2016), Education for Public Inquiry and International Citizenship (EPIIC), annually distinct thematic efforts comprised of a colloquium, symposium, immersive education, and professional workshops.

I retired from Tufts in 2016, after thirty years as the Founding Director of the Institute.

Upon becoming Emeritus, I became founding President of a nonprofit higher education consultancy, The Trebuchet. Resonating the mantra I originally developed for the Institute, Thinking Beyond Boundaries / Acting Across Borders, The Trebuchet’s motto isBreaking Down Barriers / Building Bridges.

The Trebuchet’s primary activities are the creation of non-partisan policy fora confronting global issues; and the development and deployment of a highly-interactive, cross-disciplinary network, Convisero, integrating experts and alumni of my fifty years of programming and mentoring, and new allies.

For two years, I was a Senior Fellow of the Carr Center for Human Rights Policy of the Kennedy School at Harvard University (2017-19). My ongoing concern is with the impact of corruption on human rights.

Having missed mentoring undergraduates, I became the Inaugural Fellows Mentor for the Albright Institute at Wellesley College in 2018, and an advisor for Harvard’s undergraduate International Relations Council, where I have embedded the Oslo Scholars program I created at Tufts with the Human Rights Foundation.

I am a Senior Fellow at the Liechtenstein Institute for Strategic Development and at The Raoul Wallenberg Centre for Human Rights; and a Strategic Advisor for the Human Rights Foundation, RefugePoint, and Music for Life International.

I serve on the Academic Advisory Board of the American Friends of Combatants for Peace; on the Advisory Boards of VII Photography Foundation, Embodying Peace; the Development Advisory Board, Council for European Studies; as a contributor to CES EuropeNow.