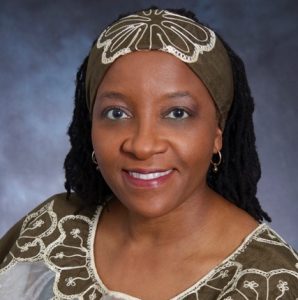 Rev. Tutu is the Missioner for Racial and Economic Equity at the Cathedral of All Souls, Asheville, NC. The challenges of growing black and female in apartheid South Africa have been the foundation of Rev. Tutu’s life as an activist for human rights.

Those experiences taught her that our whole human family loses when we accept situations of oppression, and how the teaching and preaching hate and division injure us all.  Rev. Tutu is the third child Archbishop Desmond and Nomalizo Leah Tutu.  She was born in South Africa and had the opportunity to live in many communities and countries.   She was educated in Swaziland, the US and England, and has divided her adult life between South Africa and the US.   Growing up the ‘daughter of …’ has offered Naomi Tutu many opportunities and challenges in her life.  Perhaps one of the greatest challenges she has struggled with is the call to ministry. From early in her life she would say, “I have my father’s nose, I do not want his job!” Yet this call refused to be silenced.  Even as she carried her passion for justice into other fields, the call to preach and serve as an ordained clergyperson continued to tug at her.  Finally, in her 50’s she responded to the call and went to seminary.

Her professional experience ranges from being a development consultant in West Africa, to being program coordinator for programs on Race and Gender and Gender-based Violence in Education at the African Gender Institute at the University of Cape Town.  In addition, Rev. Tutu has taught at the University of Hartford, University of Connecticut and Brevard College in North Carolina.  She served as Program Coordinator for the historic Race Relations Institute at Fisk University, and was a part of the Institute’s delegation to the World Conference Against Racism in Durban.

She started her public speaking as a college student at Berea College in Kentucky in the 1970’s when she was invited to speak at churches, community groups and colleges and universities about her experiences growing up in apartheid South Africa. Since that time, she has become a much sought after speaker to groups as varied as business associations, professional conferences, elected officials and church and civic organizations.

As well as speaking and preaching Rev. Tutu has established Nozizwe Consulting.  Nozizwe means Mother of Many Lands, in her mother tongue Xhosa and is the name she was given by her maternal grandmother.  The guiding principle of Nozizwe Consulting is to bring different groups together to learn from and celebrate their differences and acknowledge their shared humanity.  As part of this work she has led Truth and Reconciliation Workshops for groups dealing with different types of conflict.  She has also offered educational and partnership trips to South Africa for groups as varied as high schools, churches, hospices, K-12 teachers, and women’s associations.  These trips emphasize the opportunities to share our stories and experiences.

Rev. Tutu is the recipient of four honorary doctorates from universities and colleges in the US and Nigeria.  Rev. Tutu is an ordained clergy in the Episcopal Church.  She serves as Missioner for Racial and Economic Equity at the Cathedral of All Souls, in Asheville, NC. She is the single mother of two daughters and a son.