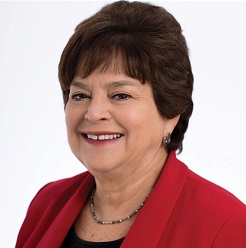 Nancy Kaufman has had a distinguished career within non- profit, government and Jewish communal sectors.  She is recognized for her commitment to advocacy and the advancement of social change in both established and start-up organizations. She has an impressive track record of not only establishing, but reviving and expanding existing organizations, fundraising and overseeing organizational growth and sustainability; innovative program development, hiring and supervising high functioning teams; partnering with boards of directors on governance, policy formulation and strategic planning. She has recently created a strategic consulting and coaching business where she is focusing on high level organizational change strategies for NGO senior managers as well as coaching for women in the c-suite or who aspire to the c-suite.

Kaufman recently stepped down as chief executive officer of the National Council of Jewish Women (NCJW), a grassroots organization of volunteers and advocates who turn progressive ideals into action. Inspired by Jewish values, NCJW strives for social justice by improving the quality of life for women, children, and families and by safeguarding individual rights and freedoms. Nancy was hired in 2010 as the first CEO in 125 years and moved the organization from an operating board to a governing board. She initiated and oversaw the transition of this volunteer-driven legacy organization to become a vibrant progressive Jewish women’s organization with sixty sections across the country and a new consolidated headquarters in Washington DC.

Prior to joining NCJW, Kaufman served as the executive director of the Jewish Community Relations Council (JCRC) of Boston for twenty years, where she led the social justice, Israel advocacy, and governmental affairs agendas for Boston’s Jewish Federation and its agencies. She created a national model of engaging Jewish communities in multi-faith organizing and meaningful social justice work.

She has also held a variety of positions related to health and human services delivery in state and local government and in the nonprofit sector, including being founding executive director of a community action agency and working for the Dukakis administration as deputy director of the Governor’s Office of Social Policy, assistant secretary of Health and Human Services, and deputy commissioner of the Welfare Department for the Commonwealth of Massachusetts.

Kaufman is a graduate of Brandeis University and received an MSW in community organization and social planning from the Boston College School of Social Work and a mid-career Master’s in Public Administration from the John F. Kennedy School of Government at Harvard University. She is also a recipient of an honorary doctorate in Public Service from Northeastern University. Among other honors, she has received awards  for: Greatest Contribution to Social Policy from the National Association of Social Workers; Alumni Achievement Award from Brandeis University;  Woman of Valor Award from the Jewish Funds for Justice; Bernard Reisman Award for Professional Leadership from Brandeis University’s Hornstein Program; the Community Leadership Award from the Armenian Assembly of America; and the Albert D. Chernin Award from JCPA. Kaufman has been recognized four times by the Jewish Forward as one of the top 50 Jewish leaders in North America.

Kaufman serves on the advisory board of the Safety/Respect/Equity Network and the board of the New York Jewish Agenda. She was a founding steering committee member of the Jewish Social Justice Roundtable; the Jewish Women’s CEOs network; and the Jewish Organizing Initiative (now JOIN for Justice). She was part of the second Mandel Leadership Cohort of UJC and Bend the Arc’s Selah Cohort 4.