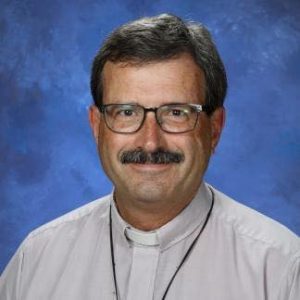 During his lived experience as pastor, his understanding of the causes of poverty, marginalization of immigrants, and compassion for the impoverished very much deepened.

Fr. Rafael Garcia is a Jesuit priest, born in La Habana, Cuba.  In 1962, his mother, brother and he left Cuba as political refugees and settled in Miami, when he was 9.  After public high school, he studied architecture and worked in the profession until he entered the Jesuits in 1983.  He felt the ‘first call’ to be a priest while on a pilgrimage in the Holy Land in 1982.

Jesuit formation stages and studies took him to Louisiana, Tampa, Tijuana (Mexico), Toronto, Madrid.  After ordination in 1993, and a year of ministry in Tampa, he was missioned as pastor to the Jesuit parish in El Paso, Texas, 4 blocks away from the US-Mexico border. In 2008 he became pastor of the Jesuit parish in Albuquerque, New Mexico and then in 2013, the parish in Kansas City, Missouri.  His desire to work with Hispanic immigrant poor brought him back to El Paso in 2016.

For many years, Fr. Rafael has been passionate and interested in the ongoing crisis, violence and injustice in the Israel-Palestine area.  He has spent time reading on the subject and is on the mailing lists for FOSNA and Jewish Voice for Peace.  He was very moved by the documentary “Disturbing the Peace”, it’s message of conversion and non-violent work for justice, and desires to support the mission of Combatants for Peace.

Fr. Rafael has lived most of his life in areas separated by various types of ‘borders’:  Miami for 20 years, with extensive Latin American immigrant/refugee population; Tijuana-San Diego area; Toronto-New York State area for 3 yrs.; El Paso-Ciudad Juarez fenced border region, for 15 years.  This provides for him a connection with the ongoing, tragic ‘borders’ and walls in Israel, Palestine, Gaza.