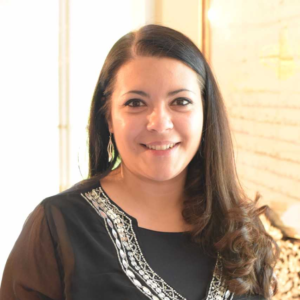 Executive Director of NewGround: A Muslim Jewish Partnership For Change

Aziza Hasan, named an influencer by the Chronicle of Philanthropy, is the executive director of NewGround: A Muslim Jewish Partnership For Change. She has extensive experience in program management and coalition building. An experienced mediator and conflict transformation practitioner, she has co-facilitated with multiple groups. Aziza’s work has been featured on Ozy, Yahoo News, MSN, Public Radio’s “Speaking of Faith” with Krista Tippett, the United States Institute for Peace, Arabic Radio and Television, and the LA Times.

Her two years of AmeriCorps service gave her hands-on experience in community organizing and group problem-solving. She earned the “President’s Volunteer Service Award” in 2006 under President George W. Bush. Aziza served on President Obama’s Advisory Council on Faith Based and Neighborhood Partnerships from 2015 to 2016, and the Executive Service Corps recognized her with the “Megan G. Cooper Leadership Award” in 2017. Aziza currently serves on the Los Angeles Commission on Civil Rights.