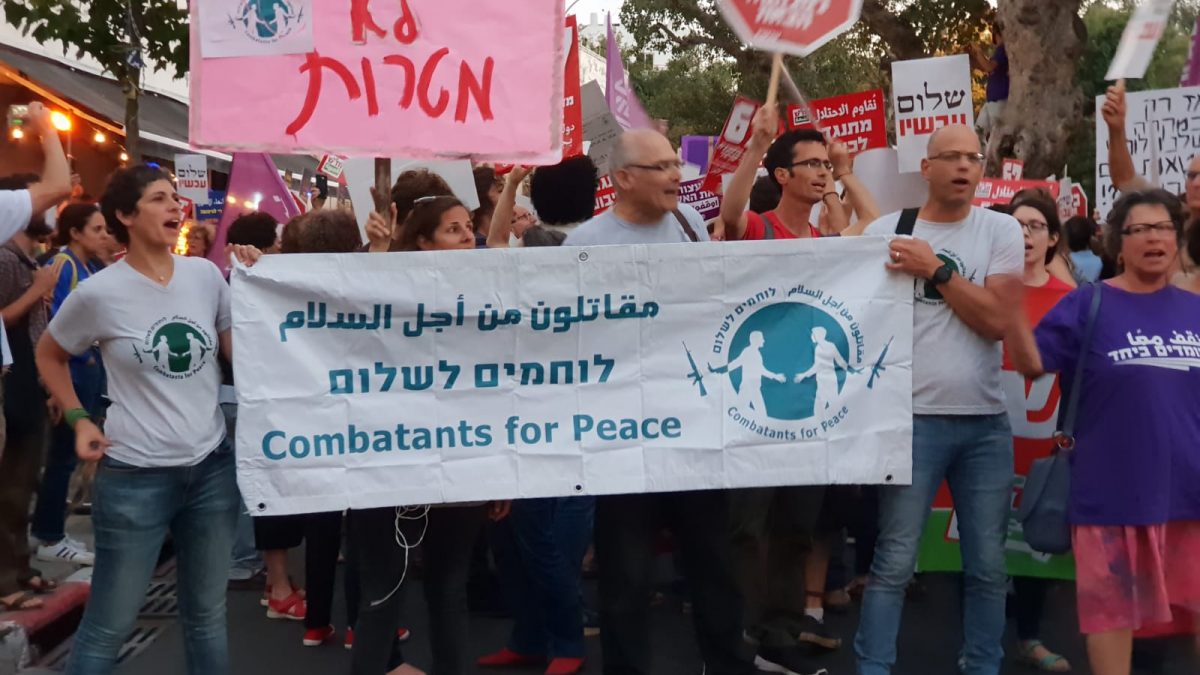 According to its promotional material, Combatants for Peace was founded in 2006, when “Israeli and Palestinian former fighters, people who had taken an active role in the conflict, laid down their weapons” and established their organization…“CFP works to both transform and resolve the conflict by ending Israeli occupation and all forms of violence between the two sides.”

The organization, nominated for the Nobel Peace Prize in 2017, is based upon three pillars: non-violence, complete cooperation between its Israeli and Palestinian members, and the honoring of human rights for both Israelis and Palestinians. “Combatants for Peace is the only organization, worldwide, in which former fighters on both sides of an active conflict have laid down their weapons, choosing to work together for peace and justice.”

On a Sunday afternoon this past April 29, between 50 and 60 individuals came to the Dwares Jewish Community Center in Providence to hear two members of Combatants for Peace, Osama Iliwit and Netta Hazan, share their perspectives. Osama, a Palestinian, agreed to speak with just a few hours notice; he came down from Boston after being told that the scheduled Palestinian presenter, Kholud Abud Raeya, had her travel visa to the United States cancelled at the very last minute. Netta Hazan, a former member of the Israeli army, daughter of a Moroccan father and Egyptian mother, spoke after Osama.

Osama’s first image of Jews was three armed soldiers standing in front of his elementary school in Jericho. It took him several years to come to see Jews as anything other than armed and dangerous. Slowly, despite being arrested and thrown into an Israeli prison for attempting to fly a Palestinian flag, he was able to let go of his negative stereotypes and see the humanity in the “other.” Today he is devoting his life to attempting to bridge the abyss between “us” and “them.”

Towards the end of his talk, Osama alluded to the frustrations he continues to face vis-à-vis the Israeli bureaucracy: while, as a West Bank Palestinian, he is permitted to spend the day in Israel, he is not allowed to sleep there. “I guess,” he quipped sardonically but without any evident rancor, “I am considered more dangerous when I am sleeping than when I am awake.”

In many ways, Netta told a story similar to Osama’s. Like Osama, over time Netta learned to overcome stereotypes and to discover the humanity in the “other.” And like Osama, Netta paid a heavy price for working with “the enemy.” What has made matters particularly difficult for Netta is that given her Moroccan father and Egyptian mother, she grew up among Israel’s Sephardic community, which tends to be Jewishly observant and politically leaning to the right; by way of contrast, she herself is secular, mostly non-observant, and politically on the left. Her involvement with Combatants for Peace has led to her estrangement from some members of her family as well as from many former friends and army buddies. On the other hand, Netta has the satisfaction of knowing that she is living her life in accordance with her most deeply held commitments to non-violence, to dialogue, to cooperation, to building a better life for both Israelis and Palestinians; and she has the joy of becoming close to men and women who share these ideals.

After Osama and Netta concluded their remarks, I presided over the Q and A session. I began by asking our two presenters to respond to the ten or so questions which members of the audience had written down on index cards during the course of their talks. I read the first question verbatim: “Please speak about the surrounding countries accepting Israel. Please speak about the surrounding countries accepting a Jewish Israel. Do you/your organization think Israel should be a Jewish state?”

Osama responded that what other countries do is not his business; his concern is how Israelis and Palestinians can best learn to live peaceably with each other. If Israelis choose to have a Jewish state – provided that such a decision is part of a just and peaceful solution to the Israeli-Palestinian conflict – that’s fine with him.

As a secular Jew, Netta expressed little enthusiasm for insisting that Israel be a Jewish state. Like Osama, her primary concern was working for a resolution of the Israeli-Palestinian conflict. Netta gave voice to her frustration with the restrictions – relating to Sabbath observance, for example – imposed by the heavy-handed religious establishment upon the secular majority,

The final question posed to Osama and Netta asked for their sense of how their respective communities viewed to the so-called two-state solution. Both speakers suggested that the majority of their communities approved of a two state solution in theory; however, such support begins to ebb as soon as the specifics are taken into account – in particular, where the proposed borders are ultimately drawn.

Perhaps the most promising aspect of that Sunday afternoon gathering last April 29 was that our Jewish community was able to come together in civil, respectful dialogue about profoundly contentious issues. In addition to Combatants for Peace, four other organizations offered their sponsorship: The Jewish Alliance of Greater Rhode Island, Temple Beth El, J Street Rhode Island, and J Street Brown.

One of the index cards handed to me for the Q and A session well expresses the sense of that special afternoon: “No question. Just wanted to say thank you for your sacred work. Thank you for your courage, faith, and inspiration. You are the future of Israel!!!”

James B. Rosenberg is rabbi emeritus of Temple Habonim in Barrington.