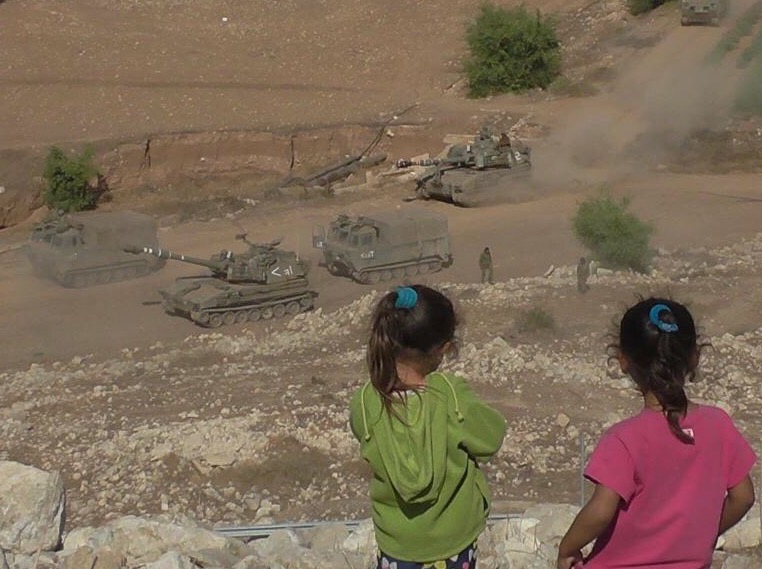 Three Israeli activists were arrested this morning at 9am, their crime? Inquiring as to the whereabouts of a Palestinian Shepherd who was arrested eighteen hours prior.

Every day in the Jordan Valley local Palestinian shepherds are harassed, arrested and threatened by violence by both local settlers and the Israeli army. The Shepherds face daily threats: settler communities very often disrupt the sheep from feeding, scaring them away from the shepherds with motorbikes, cars or even gun-shots. These same settlers will beat or harass the local shepherds, without consequence. The shepherds have nowhere to go and have no basic rights: Palestinians in this area have no right to own land – despite having lived on the same land for generations. They are not Israeli citizens, despite the fact that the area they all live in is entirely under Israeli control & their Jewish neighbors have full citizenship rights. Because these Palestinian shepherds are not citizens, they have no right to vote, nor any basic rights or protections under the law. Now, more and more of their grazing land is being restricted. They cannot graze their sheep and cattle near the border with Jordan, nearby to the local settlements, nearby to the road, nearby to randomly selected “closed military zones,” etc. It is a daily occurrence that shepherds are arrested and detained by the military for coming too close to one of the many restricted areas… simply because they have nowhere else to graze their sheep and have no other option.

In order to help protect this community, the Jordan Valley Coalition was formed. This coalition is made up of activists from several human rights organizations within Israel and Palestine: Combatants for Peace, Taayush, Machsom Watch, and others – and the activists all work together to protect the human rights of the local shepherds. Almost daily Israeli activists drive out to the community to walk with the shepherds and accompany them with their sheep. When settlers attack, they are there to document and protect – and if necessary, they can press charges (the Palestinians shepherds have no rights to press charges against the settlers). When the Israeli military threatens violence, the activists are there to protect the rights of the people.

In many cases the Israeli army will arrest and detain shepherds for walking too closely to one of the many restricted zones. This detainment usually lasts about six hours, during which time the Palestinians are held in military bases, handcuffed and blindfolded while being held. Occasionally, after six hours the military will hand them over to the local Israeli police – but more often than not, the police don’t care to follow up with these cases, as they are just too common and too benign, and so the Shepherds are released without charges. During this time, their flocks are often be scattered, causing danger and disruption to their only source of livelihood.

This morning, when the activists arrived, they found out that one of the local Shepherds had been arrested at 3pm the day before and had not been released for eighteen hours. His family had no idea of his whereabouts. The activists immediately called the local police who told them that they did not have the shepherd in their custody. The activists drove to the local military base and requested information as to the whereabouts of the Shepherd. The Israeli officers were extremely aggressive, shouting at the activists and threatening to arrest them for standing outside the base. The activists called a lawyer who is familiar with the situation. The lawyer told them they were within their rights to stand outside the base, as long as they did not take photographs of the military facility (which they were not doing and had no intention of doing). Nonetheless, after a few minutes, the activists were surrounded by a group of soldiers who arrested them, blindfolded and handcuffed them and escorted them inside the base. They were detained and held without charges for three hours. After three hours they were released (which, was expected – the army cannot legally detain an Israeli citizen who have committed no crime). At the same time, they found out that the Palestinian Shepherds was released about the same time as their arrest.

“I know that what happened to me is minor compared to what the local Palestinian community faces every day, but to be honest, I think this experience is one that all Israelis should go through at least once. When I was a soldier in the Israeli army, I witnessed, and even participated in these detainments’ countless times. There is simply no reason for it – to handcuff and blindfold a person when he has committed no real crime is simply a way to humiliate him and break his spirit. When we can put ourselves in the shoes of the “other” and experience his pain, then perhaps, finally, this conflict will end – and the dignity of all people in this land will be protected.”  -Yair Bunzel