Combatants for Peace sent letters from high-profile Human Rights Attorney Eitay Mack to the Prime Minister of Greece, the President of Cyprus, Josep Borrell (the High Representative of the EU for Foreign Affairs and Security Policy), and Israel’s Prime Minister. The letters stated that if the West Bank is formally annexed by the Israeli government, then the trainings for security and military personnel from Greece and Cypus in Israel would be unlawful and *must* be canceled. The letter states that the continued training, “will be of great symbolic importance, circumventing international law and ridiculing the EU’s opposition to annexation.” 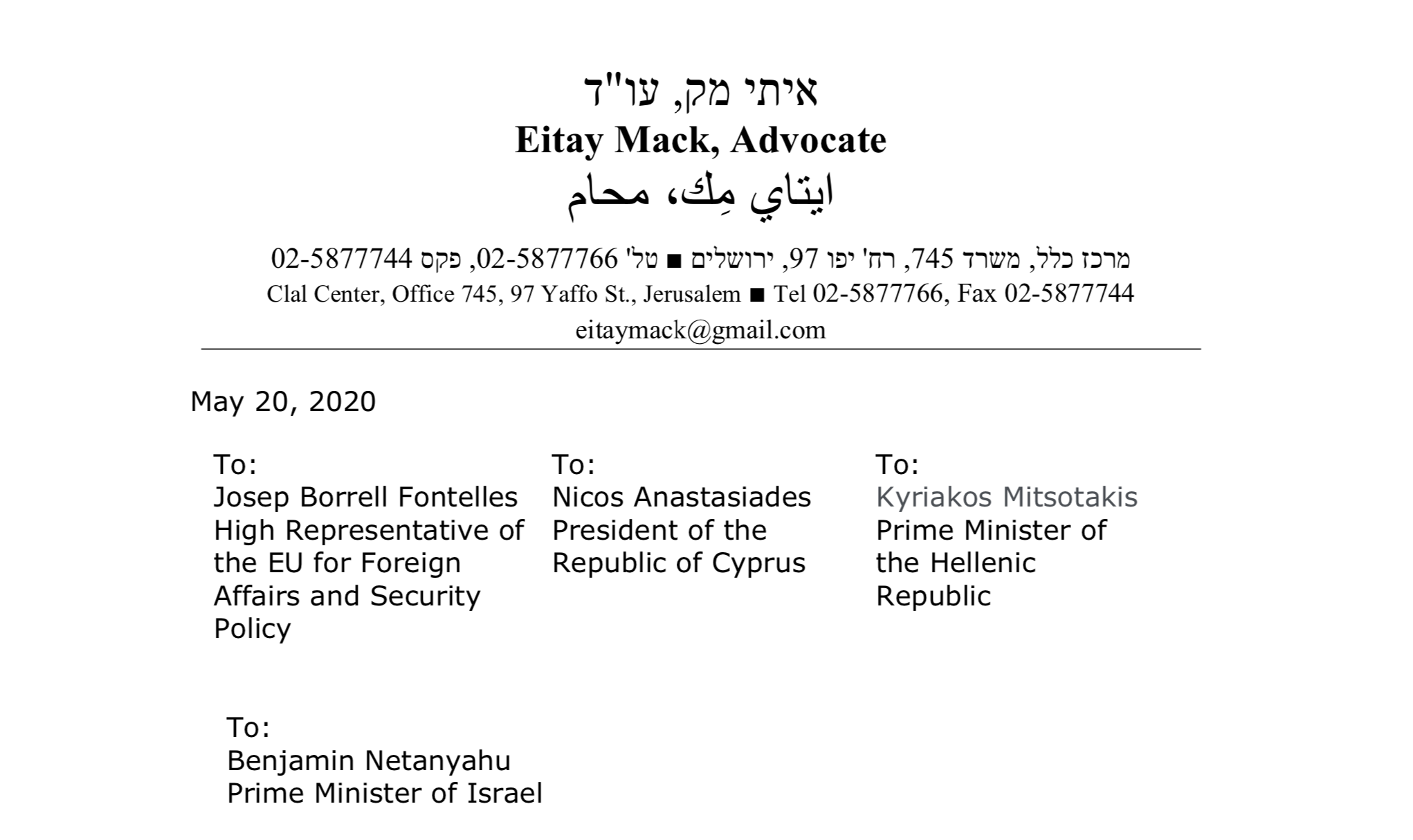 Towards the West Bank’s annexation plan, in the context of US President Donald Trump’s “Deal of the Century”, the Combatants for Peace movement, via Adv. Eitay Mack, sent an appeal to the Prime Minister of the Hellenic Republic and the President of the Republic of Cyprus, demanding the cancellation of the training agreements of the security forces of Greece and Cyprus in the State of Israel

Jerusalem, May 31 2020: A letter sent by Attorney Eitay Mack, to Greek Prime Minister Kyriakos Mitsotakis, to Cyprus President Nicos Anastasiades, as well as to the High Representative of the EU for Foreign Affairs and Security Policy, Josep Borrell Fontelles, stated as follows:

“It is inconceivable that armed forces of EU member-states will conduct military trainings in the Occupied Palestinian Territories and take an active role in the deportation and dispossession of the Palestinian population living near the closed military training areas in the Jordan Valley or any other part of the West Bank.”

“Under these circumstances, it is clear that any annexation must be rendered null and void the aforementioned agreements for the military training of the Cypriot and Greek armed forces in the territory of the State of Israel, as the territory would unlawfully include parts of the West Bank.”

Combatants for Peace emphasized that:

“It is important to note that joint military training by virtue of the above agreements is not of actual importance to the security or the operational competence of the armed forces of the three countries. These trainings are mainly important for symbolic reasons and are intended to showcase the fruits of their special ties to other countries in the region. Thus, in contrast  to the absolute secrecy in which the State of Israel practices with regard to its security relations with other countries, the agreements and training between Israel, Greece and Cyprus are widely publicized by the three governments.

“While the termination of the aforementioned agreements is not expected to cause any real security damage to the three countries, the damage is to surpass the benefit for Cyprus, Greece and the European Union if the agreements remain in effect. On the other hand, for the State of Israel, even if the IDF does not require this training for its operational competency, the continued training by virtue of the agreements, will be of great symbolic importance, circumventing international law and ridiculing the EU’s opposition to annexation.

“In case Greece and Cyprus insist on continuing the aforementioned agreements, ignoring the trampling of international law by the State of Israel, through a unilateral decision to annex the West Bank, will have serious implications for security, stability and peace throughout the world. Indeed, other states and regimes will learn that the European Union policy and the international law can be circumvented by drawing up individual agreements with specific EU member states.”

Attorney Eitay Mack said: “In view of the unequivocal commitment of the security forces of Cyprus and Greece in the agreements, to obey the laws of the State of Israel during their stay in its territories, they will not be allowed to refuse the training in the West Bank once it is legally annexed by the Knesset. That would hold even if by International law this legislation would not be valid”.

Yonatan Gher,  the Combatants for Peace Movement CEO, added: “States that consider themselves friends of Israel should, in the current situation, help save Israel from itself.  Our government is working to please a megalomaniac American president, and to that end is willing to sacrifice the security and future of both Palestinians and Israelis.”

Last week, on the eve of a visit by the US Secretary of State to Israel, Combatants for Peace wrote to all 120 Knesset members and warned them of the personal consequences in international fora which might be imposed on those who support the annexation plan.  In a letter sent to Knesset members and ministers, the movement stated: “In some countries of the world, there is universal jurisdiction, as well as other and varied options for imposing personal sanctions;  Therefore, it is recommended that before you make a personal decision whether to vote in favor of the annexation, you seek independent and objective legal counsel, to review what is stated in this notice and the personal consequences that you might face.”