Attention Heads of State: Requesting an update to the Balfour Declaration 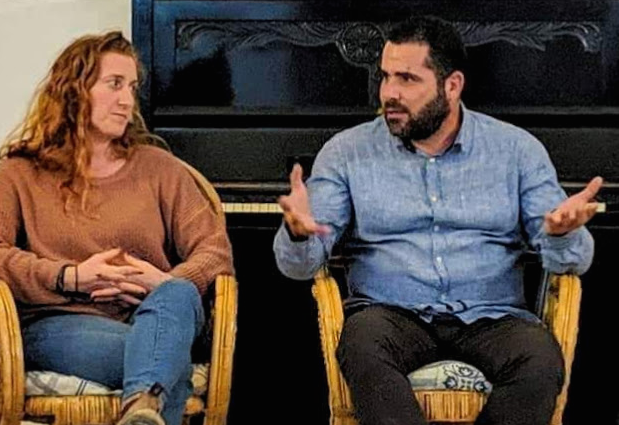 My Turn: A man of peace, detained as an enemy of America

My November journey to Israel and the West Bank with the Compassionate Listening Project was one of stark contradictions. Although the Israelis and Palestinians we met presented a broad range of perspectives, ranging from far right to ultra left, most of them agreed on one thing – that the two-state solution is moribund if not dead. While some still espouse its necessity, no one believes in its near-term viability. I came home fearful that within my lifetime, Israel will either cease to be democratic or cease to be Jewish. As the arc of bad news has accelerated, the likelihood of a just and sustainable peace between Israelis and Palestinians seems nearly non-existent.

Yet I did come home with hope, because we met amazing, heroic people on both sides of the conflict who are working together to create small-scale victories on the ground.

Two such people are Osama Elewat, a Palestinian Muslim, and Ella Naor, an Israeli Jew. Members of Combatants for Peace, they spoke to us at a Christian guest house in Jerusalem’s Old City. Combatants for Peace was founded in 2006 when Israeli and Palestinian former combatants who had taken an active role in the conflict put down their weapons and joined forces to break the cycle of violence. The organization works to transform and resolve the conflict by ending the occupation, resisting all forms of violence and building a peaceful future for both peoples.

Ella, a former member of the IDF who had fought and feared all Arabs, told us that she now would trust Osama with her life. “When I met Palestinian Combatants and listened to their stories, the enemy – the terrorists – immediately became human in my eyes.”

Osama came to the recognition that his lifelong “othering” of Jewish Israelis was weakening his soul. Motivated to create a different reality for his children, he made the courageous decision to meet the enemy, and like Ella, immediately recognized the common humanity and mutual aspirations that he shares with Israelis.

What rare alchemy, what magic potion did Combatants for Peace discover? It began with a simple, radical act that’s all too rare today. In Hebrew, the word for that act is “Sh’ma.” In Arabic, it’s “es-ta-ma.” In English, it’s “listen.” The first, foundational step for the Combatants was to suspend their passions and judgments long enough to step into the shoes of their enemy to see the world as they do. Thirteen years after Combatants for Peace was founded, its members are not only telling the world that peace is possible, they’re showing us what the art of peace looks like.

On Feb. 26, Osama was scheduled to give a public presentation at Friends Forever International in Durham, along with his Israeli counterpart, former IDF officer Michal Hochberg. Michal arrived without incident, but Osama never made it to New Hampshire. Although he has a valid passport and visa and visited New Hampshire as recently as last May, he was unexpectedly detained at JFK Airport by U.S. Border Patrol agents.

During his 13-hour interrogation, Osama’s phone was taken away and he was denied food and water. The director of American Friends of Combatants for Peace asked New York Congressman Eliot Engel to intercede. For more than an hour, Engel’s staff tried unsuccessfully to persuade the agents that Osama is not a security risk.

What irony. Although Rep. Engel chairs the House Foreign Affairs Committee and co-chairs the Democratic Task Force on Homeland Security, he was unable to persuade Homeland Security agents to allow Osama to enter our country. After red-stamping his visa invalid, the agents handcuffed Osama and put him on a plane back to Amman. Three days after beginning his journey, he returned to his home in Jericho in the West Bank.

For those of us who attended the Friends Forever presentation, the significance of Osama’s absence was almost as powerful as his presence might have been. This wasn’t the Israeli government intimidating him, it was our own. The Department of Homeland Security apparently believes that Osama’s message – that peaceful coexistence between Israelis and Palestinians is indeed possible – is too dangerous for Americans to hear.

We who disagree must vigorously support organizations such as Combatants for Peace. To do otherwise is to let the Trumpians win the war against free speech. Throughout the indignity and deprivation that Osama suffered, his spirit never wavered. On his return to the Amman airport, he sent us a video clip, concluding with this quote, attributed to Gandhi: “First they ignore you. Then they laugh at you. Then they fight you. Then you win.”

(Joel Berman is a retired physician and a member of Concord’s Temple Beth Jacob. His views are his alone and don’t necessarily represent those of his fellow congregants.)