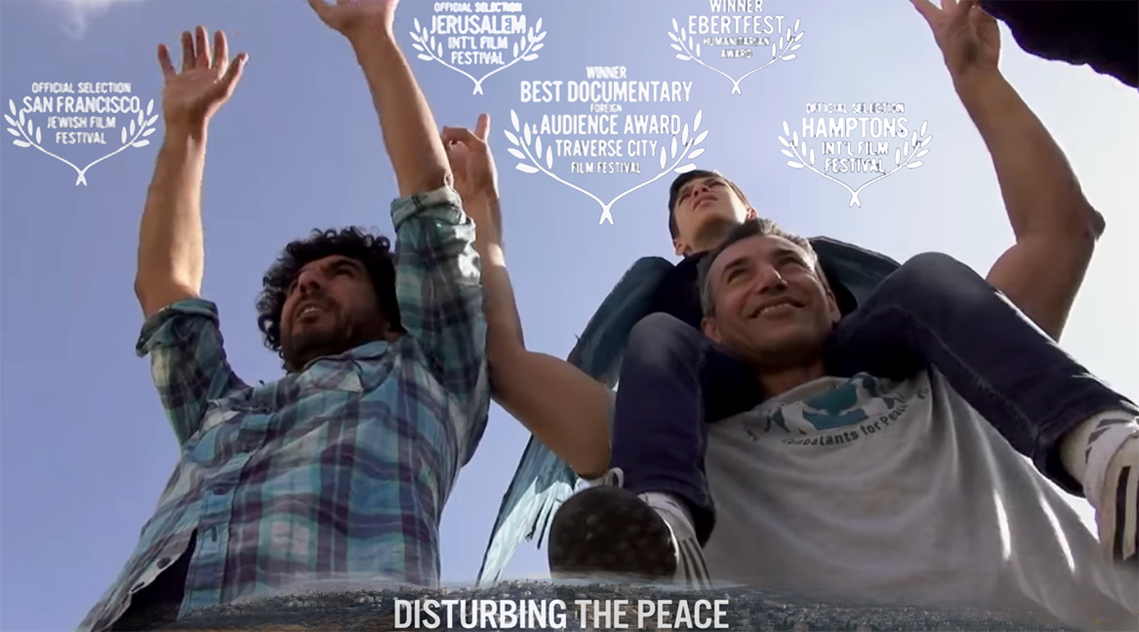 ‘Disturbing the Peace’ is a documentary outlining the work of Combatants for Peace, a group of Palestinians and Israeli former fighters, working together to promote human rights and peace for all in their homeland. They are the only bi-national, nonviolent activist group of enemy combatants working together in an ongoing, armed conflict in the world today.

The film reveals the impact of the conflict on both nations, while tracing the stories of seven members of the movement and their transformations from violence to nonviolence. It asks the fundamental question: “When we realize our stories will ultimately cause our own demise, and the only way out is to challenge it, who will be willing to disturb the peace? Where will you stand?”

The film asks us to challenge our preconceptions and open our minds and hearts to other narratives and ways of seeing. This is not merely a theoretical or intellectual task. It is a task that lays the very foundation of peace building.

As director Steve Apkon says, “I remember reading a Time magazine story about a school that had been bombed during the troubles in Northern Ireland. It talked about a poster on the back of the school that was one of the few things left in the rubble, and the poster said, “If you were born where they were born, and you were taught what they were taught, you’d believe what they believe.”

While the ‘Disturbing the Peace’ itself is undoubtedly a work of artistic and cinematic genius (and worth seeing just for this reason), the real inspiration of the film lies in its international recognition and widespread impact.

On November 8, 2016, ‘Disturbing the Peace’ won the first ever, Roger Ebert Humanitarian award.

“Earlier this year I saw a film that filled me with such extraordinary hope that it seemed more like a movement than a movie. As I observed the audiences’ reactions to it and witnessed the first person testimony of two of the Combatants, Chen Alon and Sulaiman Khatib, one Israeli and one Palestinian, I knew that this was a message worth spreading…I wanted to share this story as proof that there is indeed hope in the world”

Sulaiman Khatib and Chen Alon have been nominated for the 2017, Nobel Peace Prize, as representatives and co-founders of Combatants for Peace.

The grassroots, nonviolence movement the film is based upon, and the Disturbing the Peace film have been winning international and humanitarian awards all over the world, throughout Israel, the United States and Europe. But the real reward is in the inspiration that the movie inspires. One moviegoer shared the impact the movie had on her life:

“I never had hope before. I used to believe that the Israeli-Palestinian conflict would always be there, that there would be no end to the violence, the pain, or the tears. I refused to visit for the last ten years – even though half my family lives in Israel. I just couldn’t take the hatred and oppression that I saw plaguing the land. I felt as though the very soul of my people was breaking. I didn’t know what to do except turn away in despair.

Then I saw this film. I had the amazing opportunity to hear Sulaiman and some of the other Combatants speak afterwards. There was a question from the audience: “How do you find forgiveness after experiencing so much suffering and pain?” Souli put his hand on his heart, and with childlike innocence looked her in the eyes, “I don’t know” he relied gently, “You just forgive.” I’ve never been the same since.

The Combatants are making a true difference; they are changing the world – one person and one story at a time. I fully believe that this group can end the occupation and bring true and lasting peace to both Israel and Palestine.”

The documentary tells a true story of hope and courage. It spreads the message that when we take responsibility and open our hearts – peace, justice and freedom really are attainable. Peace is not a theoretical illusion. We know this because against all odds and opposition; Combatants for Peace are building it.