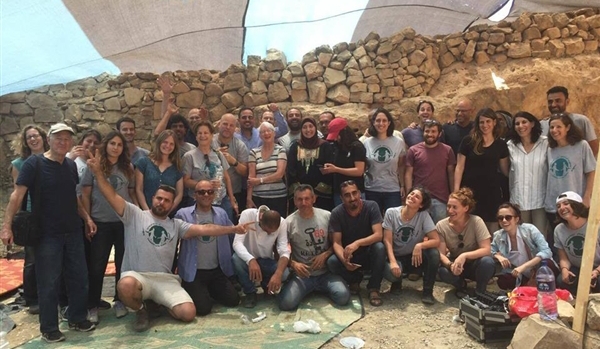 Hope and Action – do you want to join us?

Let’s walk together on “the other way.” A path of peace, dignity and hope. Together with your support we are changing reality! Monthly support for CFP will help us expand and bring change: to recruit more activists, to organize more activities on the ground, to make our voice heard in the media and to inspire more Israelis and Palestinians to meet and work together for peace.

In peace, Salam and Shalom,
Combatants for Peace

Marking 50 years of Occupation, Combatants for Peace, along with a coalition of Palestinian, Israeli and International Organizations established the Sumud Freedom Camp in a village called Sarura in the South Hebron Hills, a place from which the Palestinian inhabitants were evacuated 20 years ago by the Israeli Army in order to protect the neighboring illegal Israeli outpost of Maon. The purpose of the Freedom Camp was to repair and clear the cave dwellings that had been demolished and had been the home of around a dozen Palestinians. The Coalition brought a delegation of more than 200 Israeli, Palestinian and international participants who helped build the camp and remained there for several days. After the internationals left, the rest of the groups, relying to a good deal on Combatants for Peace, have remained there despite three attacks by the IDF during which all the equipment, tents, mattresses, generator and more were destroyed, damaged or confiscated. The army has now declared the area a closed military area, so arrests have in fact ensued for some of the few people still there. Throughout all of this, since mid-May, our real hosts – some of the original Palestinian families whose village this once was – joined the group, providing food and assistance. They of course are in far more danger than our groups, also from the nearby settlers of the Maon illegal outpost. More about the camp: sumudcamp.org

In the summer, Combatants for Peace joined one of the most successful peace demonstrations in several years and called upon the Israeli government to end the occupation and begin a genuine peace process aimed to build hope for the two peoples.

The Israeli-Palestinian Memorial Day Ceremony – an evening of hope!

Nevertheless, Combatants for Peace organized a parallel ceremony that took place in Beit Jala in which hundreds of Israelis and Palestinians were present. In addition, public screenings of the event were held in different locations around the United States and Europe, attended by thousands of people organized by American Friends of Combatants for Peace and the American Friends of the Bereaved Parents Circle.

Outside the Tel Aviv hall, a counter-protest took place including a few dozen right-wing activists who violently cursed and insulted those attending the ceremony. They failed, however,to disrupt the event, which proceeded as planned. The ceremony featured singer Eran Zur, singers Achinoam Nini and Mira Awad, musician and composer Yael Deckelbaum and Miriam Tukan, and author- journalist Eliezer Yaari, along with bereaved family members from both Combatants for Peace and the Bereaved Parents Circle.

Meytal Ofer from Jerusalem, a member of The Parents Circle – Families Forum who lost her father, Sariya Ofer, in an attack at his home in the Jordan Valley in 2013, said at the ceremony: “this is a very difficult day for me. Tomorrow we will go to the Kiryat Shaul Cemetery to visit Bambi’s grave, and then continue to Kfar Vitkin to visit my father’s grave. At the sight of these graves I want to promise my children a future in this place: a future of a better life, a shared life, I want to give them hope – not as a catchword, but as a real thing.”

Marian Saadah from Bethlehem, who lost her 12-year old sister Christine Saadah, did not get a permit to attend the ceremony and therefore her speech was pre-recorded and shown on the screens. Marian said in her speech: “the pain and the loss are one, regardless of the different circumstances. The purpose is noble, and is manifested in stopping the rivers of blood spilling on both sides and searching for a way to restore dignity, respect, equality and hope for both peoples.”

Marian Sassdah, as well as Siam Nawara, father of Nadeem Nawara who was shot and killed by a border police officer, were prevented from participating in the Tel Aviv ceremony and so, attended the joint event in Beit Jala. 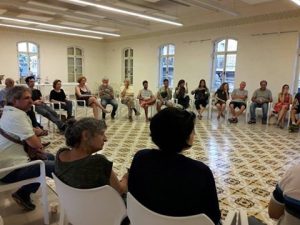 After the Memorial Day, many people contacted us, asking to join the movement. So we held a newcomers evening to present our goals and our work to a group of approximately 50 people. We discussed steps for moving forwardto a better future for all of us!

Tours through the West Bank 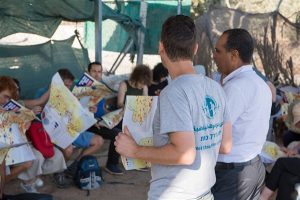 Combatants for Peace is organized in bi-national, regional communities. Regularly, these groups organize tours in their areas and explain to the interested Israeli and international public the reality of the occupation. In fact, little is known about the injustices happening every day in the occupied territories. CfP has brought thousands of Israelis, pre-army groups, activists from abroad and political delegations to our tours.

Our work and activities are financed only by donations. As an independent grassroots movement we depend on financial contributions both locally and internationally. Please help us in safeguarding our work and become a friend of Combatants for Peace! Donations are tax-deductible in the U.S. For tax-deductible donations from other countries, please contact us. Thank you so much for your support!