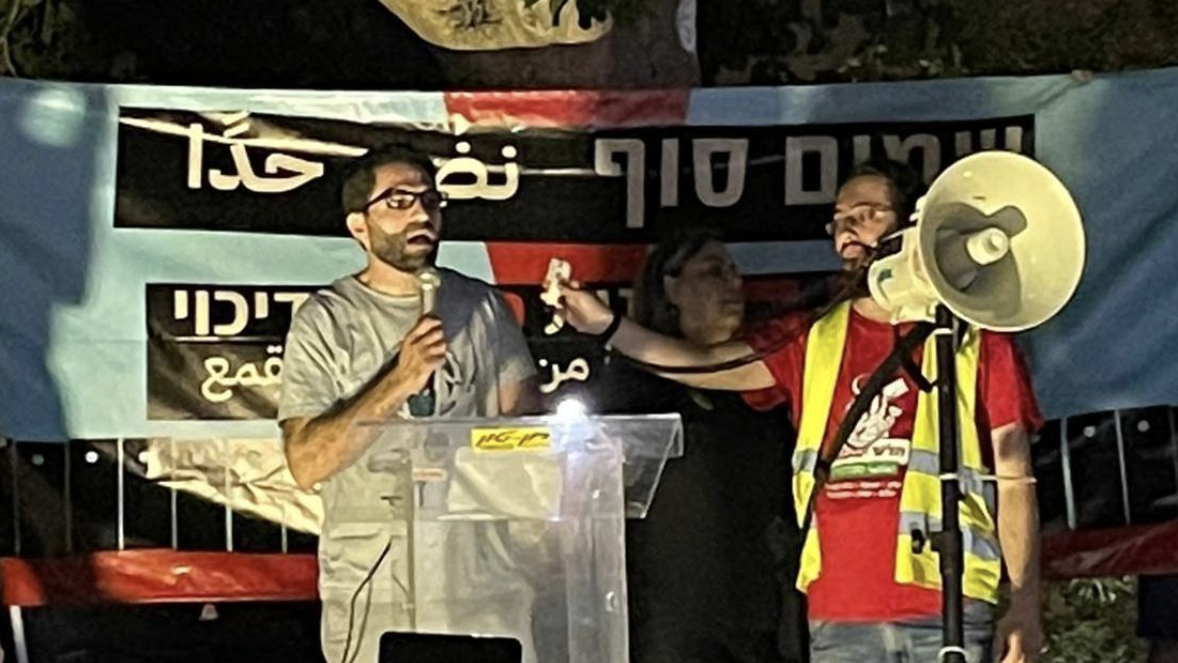 Combatants for Peace joined forces with several other peace and human rights organisations and held a march and demonstration in the heart of Tel Aviv, calling for the end of occupation. Together with thousands of people, we rallied against the harmful policies keeping Palestinians living under occupation rule, and demanding equality, justice and freedom for all. One of our leading activists, Sayel Jabarin from Ramallah, was a key-note speaker at the rally.

My name is Sayel, and I live in Ramallah. I came here today to tell you about my life, ours, under Israeli occupation.‎

‎But for me, and for us, the occupation is not just a word – it’s the mechanism that imposes itself on us, runs our lives, determines what is allowed and what is not, when yes and when not, invents laws for us, judges us – and all this without us choosing it, and without us being able to resist this power that is exerted on us. And in fact, the very fact that I’m standing here, right now, talking to you, is not a given. I understand that I might have to pay a price for it, and yet I chose to come and make things heard.‎

‎Think about it. When you leave for work in the morning, you know that you will arrive within half an hour, work, and come back at 4:00 P.M. to pick up the girl from kindergarten. When I leave for work in the morning, I don’t know what’s going to happen – because there’s a chance I’ll run into a checkpoint that will detain me for an hour or two, and maybe they won’t let me pass at all, but they’ll send me back home, and maybe even arrest me because I look suspicious to them.‎

‎Or think about it. When you get up in the morning, you go to wash your face, and it goes without saying that when you open the tap, water comes out of it. For us, this is not self-evident. Even in my city, in Ramallah, which is a modern city in every respect, there is no tap water every day. And certainly not in the more remote villages, where the occupation closes springs, lowers water flows, destroys cisterns and certainly does not allow digging new cisterns.‎

‎And that’s what I want to say here. The Nakba, which began in 1948 and continued in 1967, continues today. We, who live under occupation in all areas of Palestine – Area A, Area B and Area C – live our daily lives under a policy of apartheid. The force that governs our lives is a hostile force, which does not allow us a normal flow of life, and this is manifested in all parts of life.‎

‎It is enough to look at the Israeli settlements to understand this apartheid as clearly as possible. In all the settlements and outposts – even though they are illegal under international law – we see red roofs, green lawns, swimming pools, and lights at night. Alongside them, there are Palestinian villages that are built of crumbling structures, which the occupation does not allow for reconstruction, and which have no running water, forcing them to bring water in tankers, and often the occupation confiscates them as well. Apartheid.‎

‎And it doesn’t end there. Settlers close access roads to Palestinian communities. Settlers enter Palestinian farmland and uproot olive trees, on which the families earn a living. Settlers smash windows and write graffiti. Settlers disperse flocks of sheep with drones and steal goats. And all this happens time and time again, with the knowledge of the military, and even with its encouragement. No one has been arrested, investigations are not ongoing. Apartheid.‎

‎And here, too, it does not end. For example, the military justice system is applied to Palestinians, as opposed to the Israeli judicial system, which is ostensibly applied to settlers living in the same cell in the same territory. And why allegedly? Because the system is actually operated only on Palestinians. The State of Israel turns a blind eye to the settlers’ actions and thus encourages them to engage in more and more violence. On average, soldiers and settlers kill at least one Palestinian a day – including women and children, including journalists, including disabled people. Indiscriminately, and many times for no reason. And without any punishment. Apartheid.‎

‎And we – we love life. As Darwish said.‎

‎In this country there is a place for all of us.‎

‎Let’s recognize this fact, unite and work together to bring an end to the occupation and the conflict – so that we can finally live here together, in peace, without the constant threat of war! Because this peace may not be good for leaders, but it is good for each and every one of us. ‎

‎Let’s together say enough for the occupation, and for peace!