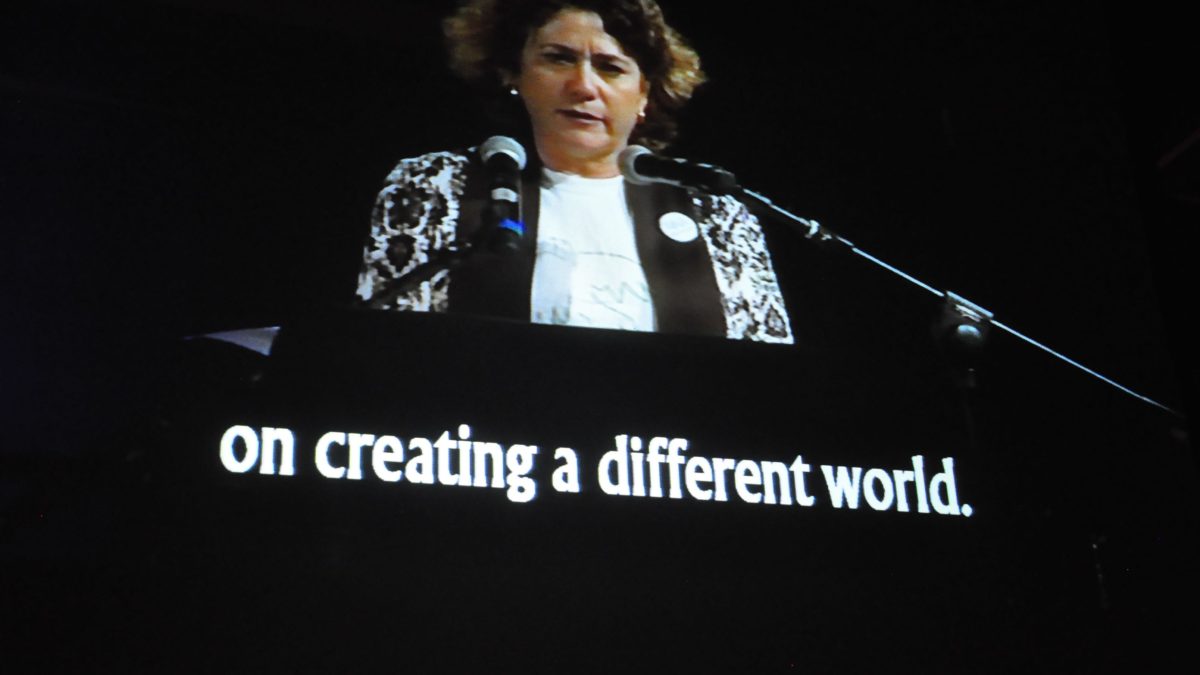 The Israeli-Palestinian Memorial Ceremony in Tel Aviv, organized annually by Combatants for Peace in cooperation with the Parents Circle, marks the pain on both sides of the conflict in a joint call for the end of the bloodshed.

Due to Defense Minister Avigdor Lieberman’s decision to deny all entry permits to the Palestinians, just days before the event, a parallel event was quickly organized in Bet Jala in the West Bank. Busloads of Israelis joined the overflowing crowd there, and there were simultaneous screenings for both venues. The Memorial Ceremony was also screened in Haifa, as well as in cities across the USA, South America and Europe.

Outside the hall, a counter-protest took place including a few dozens of right-wing activists who violently cursed and attacked those who had come to remember their loved ones in the joint Memorial. The protestors did not, however, manage to disrupt the event, which proceeded as planned.

Meytal Ofer from Jerusalem, a member of The Parents Circle – Families Forum who lost her father, Sariya Ofer, in an attack at his home in the Jordan Valley in 2013, said at the ceremony, “This is a very difficult day for me…At the sight of these graves I want to promise my children a future in this place: a future of a better life, a shared life, I want to give them hope – not as a catchword, but as a real thing.”

Marian Saadah from Bethlehem, who lost her 12-year old sister Christine Saadah, did not get a permit to attend the ceremony and therefore her speech was pre-recorded and shown on the screens. Marian said in her speech, “The pain and the loss are one, regardless of the different circumstances. The purpose is noble, and is manifested in stopping the rivers of blood spilling on both sides and searching for a way to restore dignity, respect, equality and hope for both peoples.” Saadah attended the event in Beit Jala.

Meretz Members of the Knesset, including the head of the party, Zehava Galon, along with Michal Rozin and Issawi Frej, were attacked and threatened by dozens of extreme right-wing activists outside the Ceremony.

MK Issawi Frej: “It is unfortunate that this ceremony, unlike those in previous years, was held without the Palestinian partners whose entry into Israel was forbidden by Defense Minister Avigdor Lieberman. But even Lieberman and his friends will not succeed in silencing the people on both sides fighting for reconciliation and peace.”

MK Dov Khenin, who also attended the Israeli-Palestinian Memorial Day Ceremony tonight (Sunday) in Tel Aviv, said: “I am saddened by the dozens of people who protested against the ceremony outside. They do not understand the significance of this effort to channel the pain from loss and bereavement into a joint effort to build a different future here for both people – a future of peace.”

Indeed, that was the over-all message of the evening for the thousands who attended.